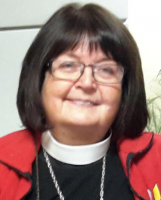 After Cal, I earned a master's degree in school counseling in Texas, a teaching credential in special education, an educational diagnostician credential, and EdD in Special Education (Teachers College, Columbia University). I founded two independent schools, one an Episcopal School in Texas, and one a school for gifted children in Massachusetts. I have been a professor in education since 1992, and was the dean of the school of education for eleven years. Five years ago, I earned a master's degree in theology and was ordained an Episcopal priest. I direct an outreach ministry center serving people who live on the street, those who have been in prison, and those who in recovery from addictions. Since the people I serve have no money, I continue to teach in education online. My degree in psychology at Cal taught me to think critically and not be afraid to question anything. It also encouraged me to be a visionary thinker and compassionate human being. After Cal, nothing academic was ever hard because I learned more than academics, I learned about life. As a Native American, I give thanks for my tuition being paid for by the Blackfeet Nation.  Go Bears!