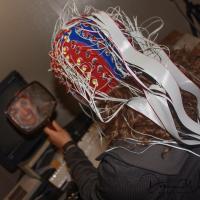 Happy to announce that starting September 1, I'll be the Vice President Research and Sandra A. Rotman Chair in Cognitive Neuroscience at Baycrest Health Sciences (University of Toronto), where I'll be responsible for the Rotman Research Institute, the Canadian Centre on Aging and Brain Health Innovation, and more.

Patrick Bennett (PhD '88) and I will keep running the Vision & Cognitive Neuroscience Lab down the road at McMaster University  in Hamilton - we just replaced our EEG system there, so our students have a new toy, and as seen in the picture, they had fun wiring me up ;) - and we'll add another aging/clinical lab at Baycrest. We're still having a great time doing research on aging, face perception, perceptual learning, object recognition, perceptual organization, spatial vision, attention, motion perception, driving, and even branching into mindfulness, BCI, and neurotechnology. Berkeley prepared us for everything!

But the best work we've done is to have had two great kids: Ryan (19) and Aidan (15), and we're particularly thrilled that Ryan just finished his first year of undergrad at Cal, where he's planning to major in Computer Science. So we're hoping to make it back to Berkeley often.