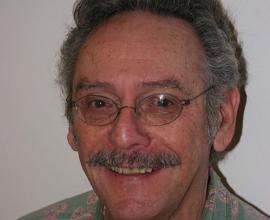 Stephen Glickman, a pioneer in behavioral endocrinology and founder of the world’s first colony of captive spotted hyenas — he raised generations of them in a UC Berkeley research facility — died at his home in Berkeley on May 22 from pancreatic cancer. He was 87.

A professor emeritus of psychology and of integrative biology, whose lifelong bond with animals began during his boyhood near the Bronx Zoo in New York, Glickman joined the UC Berkeley faculty in 1968.

Over the next five decades, he conducted studies of creatures great and small, authoring more than 100 research papers. His sharp intellect, warm wit and overall lovability engaged peers and protégés in scientific and social justice pursuits, colleagues said.

“Steve was a giant in the field of animal behavior,” said UC Berkeley psychology chair Ann Kring. “He studied a wide variety of species in the wild, at the zoo and, perhaps most famously, at the field station where he conducted work with hyenas for more than 30 years.”

Glickman’s standout legacy is his ardent stewardship of a colony of spotted hyenas at UC Berkeley’s Field Station for the Study of Behavior, Ecology and Reproduction. The hyena compound in the Berkeley hills, above the campus, closed in 2014 when funding dried up, but not before yielding seminal discoveries about endocrinology, fertility and other medical conditions that affect humans.

Hormone-driven matriarchy
By studying female hyenas, who use a long, phallic clitoris, instead of a vagina, for mating and giving birth, Glickman and fellow researchers found that high levels of androgens produced in their ovaries masculinized their sex organs and boosted their aggression and dominance in the pack.

He had a deep passion for the blunt-snouted hyenas, which are both predators and scavengers and are born with a full set of teeth that can instantly crush bones, make shrill giggling sounds when ruffled and are often cast as villains. And that passion was contagious.

“He introduced me to the wonders of the spotted hyena, to the pleasures of working in the field station and about the history of evolution and of psychology,” said Frederic Theunissen, a UC Berkeley psychology professor who studies the vocalization and communication of zebra finches.

Glickman’s hyenas, sporting names like Ghost, Goblin and Tuffy, even caught the eye of animators working on Disney’s 1994 film, The Lion King, who used them as models.

In honor of Glickman, the campus’s Field Station for the Study of Behavior, Ecology and Reproduction — which Glickman headed from 2000 to 2012 — will be renamed after him.

“I am very happy that we have honored our promise to Steve to make this happen,” wrote UC Berkeley integrative biology professor Eileen Lacey, in announcing to the faculty that their renaming proposal had been approved by UC Berkeley Chancellor Carol Christ and UC President Janet Napolitano.

In a 2018 video interview with his longtime friend and UC Berkeley colleague Irving Zucker, who also is a professor emeritus of psychology and of integrative biology, Glickman recalled a childhood spent visiting the Bronx Zoo. His nanny’s brother was the keeper of the rhinoceros house and she took him there often.

“I would be staring at a rhinoceros, whom I was sure was communicating with me, and that began a life of connecting to animals that continues to this day,” Glickman told Zucker.

Around that time, Glickman worked with zoologist Richard Marlin Perkins, who was director of Chicago’s Lincoln Park Zoo and went on to host the popular TV show “Wild Kingdom,” starting in 1963. Through Perkins, he was able to gain access to Lincoln Park Zoo and study curiosity in captive animals there.

In one experiment, Glickman tossed different objects into cages to see how different animals would respond. He found that those with easy access to food, such as grazing animals, showed less interest in the objects than did predators that had to hunt for food.

In 1962, a Miller Research Fellowship for young scientists brought Glickman to UC Berkeley where, among other things, he studied the social interactions of skunks.

There, he met Krista Zimmermann, a Berkeley native. The two bonded over their love for wildlife, married in 1964 and had a son, Matthew, and a daughter, Lauren.

Glickman, at left, and daughter, Lauren. Across the table, son, Matthew, and wife, Krista, at Saul’s Delicatessen in Berkeley. (Photo courtesy of Matthew Glickman)

“When we were kids out in nature with the two of them, he had the animals covered, and she had the plants. They made a formidable duo,” said his son, Matthew Glickman.

In 1967, Glickman and psychologist Bernard Schiff published their seminal study, “A Biological Theory of Reinforcement,” which is cited in books and research papers to this day.

“Their findings showed that animals, and people, are just as likely to respond to the cue or promise of a reward as they are to the reward itself,” Kring said. “For example, when people become addicted to, say, heroin, cues such as needles can reinforce addictive behavior and even drive behavior more than the actual drug.”

Teaching science and diversity
In 1968, after having taught at Northwestern and a two-year stint as an associate professor of psychology at the University of Michigan, Glickman joined the faculty of the UC Berkeley Department of Psychology.

He taught the history of psychology, among other courses, and conducted comparative research on numerous species of mammals and reptiles. One of his colleagues at UC Berkeley was Frank Beach, who is regarded as the founder of behavioral endocrinology. He died in 1988.

Glickman genuinely enjoyed teaching, and his colleagues admired his firm, but gentle, style.

“He could say ‘no’ to a student in a way that made her or him walk away with a smile. It was just amazing,” recalled Ervin Hafter, UC Berkeley psychology professor emeritus.

In the early 1970s, Glickman was appointed to the campus’s inaugural Title IX committee. The experience raised his awareness of race and gender inequities on campus.

In his video interview with Zucker, Glickman recounted how black students in the 1980s asked him to teach them about sickle cell disease, a red blood cell disorder that disproportionately affects people of African descent.

Instead, Glickman teamed up with the students to create a seminar that looked at the health impacts of historical, environmental and institutional biases against African Americans.

“It was a wonderful seminar,” he recalled to Zucker.

In 1975, Glickman received UC Berkeley’s Distinguished Teaching Award, the campus’s most prestigious award for teaching. From 1977 to 1982, he served as chair of the psychology department, making efforts to promote community and diversity among the faculty.

As part of a campus seminar series, he invited African American psychologist Robert Guthrie to talk about his book, Even the Rat was White: A Historical View of Psychology, and raise awareness of the need for diversity in academia.

Mission Spotted Hyena
A major turning point in Glickman’s career came in the early 1980s, when then-UC Berkeley postdoctoral fellow Lawrence Frank and Julian Davidson, a behavioral endocrinologist at Stanford University, invited him to Kenya, where they had been studying spotted hyenas in the wild.

Frank and Davidson had hit a wall in their research and proposed that Glickman bring some of the hyenas in Kenya to the field station in the Berkeley hills to be studied in captivity.

The Field Station for the Study of Behavior, Ecology and Reproduction had been established in the early 1960s by UC Berkeley anthropology, psychology, zoology and College of Natural Resources faculty to promote the investigation of animal behavior in more natural settings than those provided by traditional laboratory environments.

At first, Glickman was skeptical about making the trip, but his wife changed his mind.

“Krista said to me, ‘Let me understand this. Lawrence Frank has invited us to Africa to live in a tent on the banks of Talek River surrounded by elephants, zebras, giraffes and hyenas, and you don’t know if we should go. Why are we married?’” Glickman told Zucker. “I capitulated.”

The Glickmans headed to Africa and returned in 1985 with some 20 spotted hyena cubs from Kenya’s Maasai Mara region, which they bottle-fed at the field station.

Initially, Glickman’s hyena studies on campus focused on the role of hormones in female anatomy and behavior. But over time, as scientists from around the nation, and the globe, got involved, the research branched out into other areas.

In 1996, Glickman took a joint appointment at UC Berkeley in the Department of Integrative Biology. While he juggled teaching and research and, later, administrative duties at the field station, his devotion to his hyena clan never wavered.

“My favorite times were going up to the field station with Steve, because it was like watching a child opening a long-awaited Christmas gift as soon as we got out of the car,” said UC Berkeley psychology professor Lucia Jacobs, who studies animal cognition and behavior.

Glickman retired in 2008, but continued teaching as a Professor of the Graduate School, a post-retirement appointment, and collaborating on various scholarly and research projects, leading the field station and caring for the hyenas.

But funding for hyena research gradually dried up, and when a National Science Foundation grant expired in 2013, Glickman was forced to re-home the last of his hyenas at various zoos and animal facilities. A year later, the gates of the colony were permanently shuttered.

In later years, ailing health gradually took a toll on his mobility, but his mind remained sharp and his humor warm.

Outpouring of tributes
When the campus closed this March due to COVID-19 stay-at-home orders, Glickman, with his signature optimism, told Kring that his cancer was “advanced, but treatable.” However, the treatment did not work.

Kring’s tender note to faculty about Glickman’s May 22 passing set off an avalanche of poignant email tributes.

“The outpouring of grief, admiration and reflection that took place over email was something I have never experienced in my nearly 22 years at Berkeley,” Kring said.

UC Berkeley developmental psychologist Alison Gopnik recalled in her email remembrance how Glickman introduced her to ideas that shaped her work.

Stephen Glickman“Steve is the only person I know who could be genuinely lyrical about hyenas,” she wrote. “He was a lovely and brilliant man — We will all miss him terribly.”

Zucker, perhaps, will miss Glickman more than most.

“Steve was my best friend, and I loved him dearly,” he wrote in an email tribute. “Our lives were enriched by his presence on campus as faculty for 52 years, and his loss leaves a profound hole in our lives.”