Remembering Anne Treisman, who passed away at 82 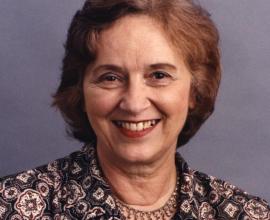 Anne Treisman was a Professor of Psychology at UC, Berkeley from 1986 through 1994. She often said that these were some of the happiest years of her professional life. These were the years that she was elected to the Royal Society of London and the National Academy of Sciences. These were also the years where she branched out and developed close collaborations with other colleagues that influenced neuropsychology, neurosciences, vision sciences, computer science and more. I was privileged to be one of these colleagues.  We worked together applying her theory of feature integration to studies testing patients with brain injury who had deficits in selective attention. It was a phenomenal and exciting time. We showed that patients who have lost spatial awareness after brain injury have difficulty integrating features, consistent with the idea that integration requires spatial attention. Our findings continue to influence both experimental and clinical work within cognitive neurosciences. For instance, visual search has become a standard task in studying interventions developed to enhance cognition after stroke or other types of brain injury. Functional MRI is being used to examine neural systems in healthy brains that underlie feature integration and selective attention. Studies of auditory feature integration and the brain is more and more common in both healthy and brain injured individuals.

Many of the students who studied with Anne during her Berkeley years have gone on to highly successful careers. For instance, Nancy Kanwisher (Professor, MIT) and Nelli Lavie (Professor, U of London) were post-doctoral students. They have both used behavioral and neuroimaging to advance understanding of visual perception and attention as well as memory. Professor Kanwisher is now a member of the National Academy.

Professor Treisman’s laboratory (shared with her husband Daniel Kahneman) was a buzz of activity and ideas. She would sit on a sofa in the open space with her laptop on her lap and write beautiful and original manuscripts. She would design experiments with her students and colleagues in the same spot. She did this despite the noise surrounding her. Perhaps she honed this ability while raising 4 young children during her early career in England.

She and Danny left Berkeley for Princeton in 1995. It was a difficult decision, especially for Anne. But the package that a private university can offer cannot be matched by a public university such as Cal. There was also the advantage of being closer to her two adult daughters living in New York City. However, Anne refused to sell her house in Berkeley and it became the center of family holidays and summer vacations.  She could be seen in Tolman Hall during these times, typically in my laboratory where we made her an adjunct member in good standing.

Anne Treisman was a giant among scientists, as represented by the Presidential Medal of Science presented to her by Barack Obama. She was a complete academic. She will be sorely missed but will be remembered for her collegiality, her gentle manner and her love of wit, good food and good friends as well as for everything Berkeley.

The obitury of Anne Triesman in New York Times