Coordinating Movement, Language, and Thoughts? An Expanded Role for the Cerebellum 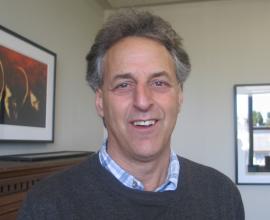 Anytime we are using our coordination – whether taking a shot in golf or just reaching for a coffee mug – the cerebellum is at play. The small structure at the base of the brain is well-known to be critical in coordinating our movements, their precision and timing. But according to a growing body of research, the same predictive abilities the cerebellum brings to motor control also influence language and learning, and may even bring insight into thought disorders associated with schizophrenia.

The cerebellum is “very deceiving – it looks quite small but it’s just jam packed with neurons, in fact well over half the neurons in the entire central nervous system,” said Richard Ivry, a cognitive neuroscientist at the University of California, Berkeley, speaking in a plenary session at the American Psychological Association (APA) annual meeting earlier this month in Washington, D.C.

Describing the cerebellum as a beautiful, treelike structure, Ivry said its complex, yet consistent, architecture enables it to make predictive computations over and over again in many different contexts. And, he argued, those contexts go beyond motor and sensory skills, making it a more widely influential structure than previously thought.

Recent research has shown how breakdowns in cerebellum function might contribute to failures in cognition. Patients with cerebellar degeneration or lesions show mild deficits on a range of neuropsychology tests, especially those associated working memory and verbal fluency. Additionally, hundreds of imaging studies have shown activity in the cerebellum that cannot be related to motor demands, hinting at additional roles for the structure.

To understand the role that the cerebellum plays in general cognition and learning, Ivry first took the audience through some classic cognitive neuroscience experiments that demonstrate motor control. He held a pen out in front of him and then used his other hand to simply point and touch the pen. For patients with cerebellar degeneration, this pointing task is no longer so simple; their hands will tremor and waiver, a classic sign of “dysmetria,” or a lack of coordination.

In other experiments, researchers have used prism glasses, which laterally shift the visual world, to test how our cerebellums calibrate and adjust over time. Donning a pair of prism glasses, Ivry tried the pen pointing task again but missed, as the glasses shifted his perception of where the target was located. But after trying a couple of times, receiving feedback whenever he missed or touched the pen, he was able to adjust and consistently touch the pen. After removing the glasses, his aim was off again, but his cerebellum quickly re-adapted.

“Patients with cerebellar degeneration show poor adaptation,” Ivry said. But in healthy adults, the cerebellum is so good at adapting that it automatically corrects for so-called “sensory prediction errors,” even if it’s maladaptive. In this way, the cerebellum is “dumb,” he said, as it lacks knowledge of higher order information from the cortex. “You can’t turn off the cerebellum learning process,” Ivry said.

In fact, Ivry and colleagues found in a series of experiments that patients who had damage to their cerebellum were actually able to perform better in a targeting task than healthy populations when it required strategic thinking. After consistently rotating a target around a clock, healthy patients had an automatic hand drift that they could not turn off (like in the pen demonstration with the prism glasses): Even when told the winning strategy for reaching the target, they could not succeed. The participants with cerebellar degeneration, however, could implement the strategy without interference from the “dumb cerebellum.”

They also asked patients with prefrontal damage to perform the task, and those participants were unable to correct the automatic drift – showing that prefrontal impairment disrupts the cortex’s strategic function from overriding the automated sensor-motor function of the cerebellum. Yet, Ivry said, it is not so simple – arguing that there may not be such sharp boundaries between the brain regions.

One area where these connections may come into play is in language generation, which requires real-time semantic prediction – the ability to anticipate what you want to say and to adapt as the conversation requires, for example, taking turns in speech. In work with Torgeir Moberget and colleagues, Ivry tested whether the cerebellum helps with processing “predictive” sentences, where the context provided by the initial part of a sentence gives clues to what will be at the end of the sentence.

Using fMRI, the researchers looked at how participants’ cerebellum responded to sentences that were either predictive (think: “The pond water was frozen”) or that had a predictive semantic violation (think: “The man ate the railroad”) compared to nonsensical sentences. More activity in the cerebellum would be associated with computations needed to generate the predictions and to detect errors.

This works raises further questions about whether these prediction deficits could be partially responsible for thought disorders in schizophrenia – the inability to distinguish between self-produced speech and thoughts and external speech and thoughts.

Another example of how the cerebellum may influence cognition comes from the world of neuropsychiatry. Neurology studies have shown cerebellum abnormalities in patients with autism, ADHD, and schizophrenia. And some people with schizophrenia exhibit problems with motor coordination, and even show impairments in motor learning tasks such as the prism adaptation. These observations have led to the question of whether we see indications that schizophrenia patients struggle to use predictive information.

The baseline for recent work in this area came from a study in which researchers tested how the brains of patients with cerebellar degeneration respond to externally generated sounds compared to self-initiated ones. Participants would press a button to hear a sound over and over again and researchers compared the participants’ EEG response to when they heard a sound without pushing a button. When the sound was preceded by the button pressing – the predictive condition – the EEG showed a suppressed brain response in healthy patients that was absent in patients with cerebellar degeneration.

The suppressed EEG brain response also is absent in patients with schizophrenia, Ivry said, according to results from another study. “To them, their brain responds the exact same way to a tone whether it was generated externally or if they were pressing a button.” They don’t seem to have that same predictive response.

“People with schizophrenia and people with cerebellar degeneration are showing a very similar loss of this predicative capability,” he explained. This works raises further questions about whether these prediction deficits could be partially responsible for thought disorders in schizophrenia – the inability to distinguish between self-produced speech and thoughts and external speech and thoughts.

Although it is clear that the cerebellum has a more expanded role in cognition than previously thought, Ivry said that there is much more to learn. For example, he is unsure how to reconcile the idea that the cerebellum can be ignorant to the cortex in certain motor tasks yet access the cortex for predicting semantic violations. That’s one of many secrets that he and colleagues look forward to continuing to explore.