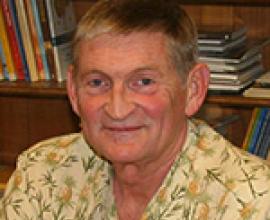 Seeking to engage children in neuroscience research and stimulate interest in the subject, UC Berkeley professor of psychology and neuroscience Robert Knight last Monday launched an online scientific journal mainly edited by students between the ages of 8 and 18.

The journal, called Frontiers for Young Minds, officially launched at the annual Society for Neuroscience conference in San Diego. Under the slogan “science edited for kids, by kids,” the journal collects neuroscience-related research articles and sends them to children around the world who edit and review the articles under the guidance of professors and scientists.

Knight said in an email that his inspiration for the journal stemmed from his belief that kids are the future and that science education needs a boost. He said the journal can be a tool to involve kids from different countries and socioeconomic statuses.

“Basically, the website is about educating kids in the review process of scientific articles,” said Rick Malzyner, an undergraduate research assistant in Knight’s laboratory. “It both brings kids into the world of scientific research and gives scientists an active platform to reach out.”

The first edition of Frontiers, which also came out last Monday, collected articles from scientists whose work fell under 21 kid-friendly topics ranging from “The Brain and Friends” to “The Brain and Talking/Texting.” The research was simplified to make it more comprehensible for students.

Among scientists submitting articles was UC Berkeley graduate student Ryan Morrie. Morrie co-wrote an article dispelling myths about animal vision with another graduate student and submitted it to the publication. Two weeks later, he received the article back with commentary from a 12-year-old named Henry.

Morrie said Frontiers is a good opportunity to get students involved in neuroscience research.

“Not only does it provide kids with interesting topics — it gives them a head start in the field,” he said.

After the review process, the kids decide whether to approve articles for publication. Published articles featured quirky topics such as video games and the brain, “seeing with your ears” and the effects of friendship on the brain.

Many of the youngsters expressed an interest in science or editing.

“From a young age, my ambition has been to become an accomplished neurosurgeon,” said 13-year-old Bhargavi, from Berkeley, in a biography she wrote for the journal.

“Woe betide the contributor who falls under my editorial pen,” wrote another student, 14-year-old Caleb from Canada.

While most of the journal’s activity happens online, Knight said he hopes to start an outreach program for the journal, bringing in disadvantaged students from around the Bay Area to work personally with a UC Berkeley graduate student.

“This started out as just an idea I had,” Knight said. “Now we’re looking at ways to make it grow and expand.”