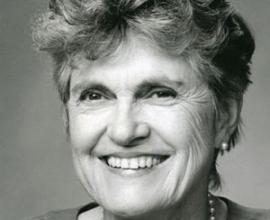 Susan Ervin-Tripp, a psycholinguist acclaimed for her pioneering studies of bilingualism and language development in children, native Americans and immigrants, died earlier this month in Oakland from complications of an infected cut. She was 91.

A widely cherished UC Berkeley professor emerita of psychology and an early advocate for gender equity in academia, Ervin-Tripp remained intellectually, socially and politically active after she retired in 1999, and right up until her death on Nov. 13.

Among other notable achievements, Ervin-Tripp, a 1974 Guggenheim fellow, discovered that people’s mindsets can change depending on the language they are speaking, providing new insights into the cognitive psychology of bilingualism.

“She was a pathbreaker, embracing new directions in the study of first-language acquisition as well as bilingualism,” said UC Berkeley psychology professor emeritus Dan Slobin. “In addition to groundbreaking scholarly work, she focused on the treatment of women and minorities, yet always using her psycholinguistic and sociolinguistic skills to provide a scientific foundation to her advocacy.”

“This, along with actions by Sue and many other women on campus, led to significant increases in hiring of women faculty and movement toward pay equity between male and female faculty members,” Kring said. “She was a beloved member of the department, never shy to express her views but also keen to listen and understand others. She will be missed.”

Ervin-Tripp’s husband of 54 years, Robert Tripp, is a professor emeritus of physics at UC Berkeley and the Lawrence Berkeley National Laboratory.

Love of food and family

“She expressed her love for family by cooking spectacular meals, by producing berry pies in the middle of the night for a grandchild’s birthday using the pie-crust recipe of her grandmother, and by involving us in cultural activities she loved like museum visits and baroque music performances,” Tripcevich said.

Tripcevich’s wife, Cheyla Samuelson, said her mother-in-law had a penchant “for the word ‘delicious,’ which she would apply with equal relish to a piece of baroque music, a wonderful painting or a newborn baby.”

Despite being in her 90s, Ervin-Tripp’s passing came as a shock to family, friends and colleagues, especially those who had recently socialized with her. Margaret Conkey, a longtime friend and UC Berkeley professor emerita of anthropology, ran into Ervin-Tripp at a recent meeting of the Society of Women Geographers.

“She was in a lively mood at the meeting, and very active right up until the unexpected end,” Conkey said.

Keith Johnson, chair of linguistics, recalled how he came away from a recent gathering impressed by Ervin-Tripp’s humor and humility.

“She laughed about her own intellectual trajectory and remarked on the role of luck in it all,” Johnson recalled in a note to his department. “She was the only woman at the table when psycholinguistics was ‘invented’ at the 1953 Indiana Linguistics Institute.”

Ervin-Tripp was born on June 29, 1927, in Minneapolis, Minnesota, the youngest of two children born to Kingsley Ervin Sr., a vice president at Lyon Chemicals Inc., and Marian Moore Ervin. She and her older brother, Kingsley Jr., spent many summers swimming and fishing on a lake near Saint Cloud, Minnesota.

At 13, she published a defense of Cubism and Picasso in the Minneapolis Star Ledger. At Northrup Collegiate High School, she read literature in five languages and reviewed newly published works by Thomas Mann, Andre Gide, Jean Cocteau, and James Joyce, according to her older son, Alexander Tripp.

As an art history major at Vassar College, she took classes in several disciplines and worked on Henry Wallace’s 1948 presidential campaign during her senior year. In a psychology course, she was asked to observe the interactions of young children for five minutes and describe what happened. That led to an epiphany that she recounted in a 2003 letter to the Vassar Quarterly magazine.

“I have been doing research for 50 years, and at the heart of it all is the extraordinary insight one gets from detailed observation,” she wrote. “In my case, it is of speech, as a psycholinguist. I study natural interaction, armed with tape and video recorders. I am sure the impact of (this) superb assignment was what steered me there.”

After graduating from Vassar in 1949, she began her doctoral studies in social psychology at the University of Michigan, earning her Ph.D. in 1955. She studied Navajo verbal behavior, among other languages, and taught for three years at the Harvard School of Education.

In 1958, she was offered a visiting assistant professorship at UC Berkeley, and drove there alone from Cambridge, Massachusetts, in a Rambler convertible, camping in fields and abandoned farmhouses along the way. A year later, she landed a tenured position in what was then UC Berkeley’s Speech Department.

An avid skier, she met Robert Tripp at the Clair Tappaan Lodge on Donner Summit in 1963. They married in 1964 in Geneva, Switzerland. Their eldest son, Alexander, was born in 1965, daughter Katya in 1966 and son Nicholas in 1970.

At times, parenting clashed with political activism on the UC Berkeley campus, but she tried to take it in stride. During a 1970 protest against the U.S. invasion of Cambodia, for example, a National Guardsman threatened her visibly pregnant belly with a bayonet as she tried to get to her office at Dwinelle Hall, she recalled in a 2016 interview for UC Berkeley’s Oral History Center.

“Mom seemed to have the energy of three people, because at the same time that she was breaking barriers on campus as a woman and pioneering research in her field, she was also raising the three of us,” Tripcevich said.

Her efforts paid off. In a 1964 experiment, she showed a series of illustrations to bilingual French adults living in the United States and asked them to invent a three-minute story for each image. In describing each scene, the storytellers emphasized certain interpersonal dynamics in English and entirely different ones in French.

In a 1968 experiment of Japanese women married to American men in San Francisco, she found that the wives’ answers differed dramatically depending on the language in which the questions were asked. The results suggest human thought and feeling is expressed within language mindsets.

In 1975, Ervin-Tripp secured a faculty position in the psychology department, where she focused on early language development in mono- and bilingual children.

As her own children grew older, their language acquisition, jokes and insults became material for her research papers. She made presentations on such topics as “Gender differences in the construction of humorous talk,” “It was hecka funny: Some features of children’s conversational development” and “Risky laughter: Teasing and self-directed joking among male and female friends.”

Among other honors, she received a Guggenheim fellowship in 1974 and a Cattel fellowship in psychology in 1985. She was also a dedicated research psychologist in the Institute of Human Development and the Institute for Cognitive and Brain Sciences. In 2000, she served as president  of the International Pragmatics Association.

In her 70s, Ervin-Tripp acknowledged that she was slowing down physically, and so would give her beloved downhill skiing one last go.

“It was apparent it might be necessary to stop because of arthritis, so I thought I would really enjoy that run,” she wrote in an email to her family. “Because at my age anything you like to do may suddenly be unavailable. But it is not sad. It just means enjoy. It’s like mindfulness training.”

That combination of tenacity, resilience and cheerful optimism is what made Ervin-Tripp so remarkable, family members said.

“She never fully accepted slowing down with age and had a fire of curiosity until the very end that she shared with everyone whose life touched hers,” said her daughter, Katya Tripp. “The intensity of the light of who she was is irreplaceable, and we miss her terribly.”

A campus memorial to celebrate the life and legacy of Ervin-Tripp will be held in the spring. For more details about the event, email ervin.tripp.memorial@gmail.com