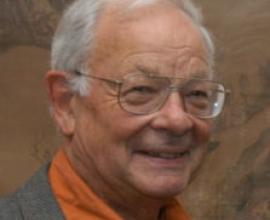 It is with deep sadness that we share the news of the death of a cherished colleague Professor Martin V. Covington. He passed away on January 29, 2018, peacefully, at his beloved home in Sea Ranch, California, just shy of his 82nd birthday.

Professor Covington was internationally known for his research on student motivation and achievement in the classroom. With vivid experiments and memorable conceptualizations, he focused attention on a crisis of motivation in education, arguing that a love of learning is greatly undermined when we turn schooling into an ability game. His many articles and books, among them Self-Worth and School Learning (1976), Making the Grade (1992), and The Will to Learn (1998), have become classics in the field and are used worldwide.

His most recent book, Life Beyond Grades: Designing College Courses to Promote Intrinsic Motivation, co-authored with Linda M. von Hoene and Dominic J. Voge, was just published in August 2017, by Cambridge University Press. The completion of this monumental work brought him much joy and provides the educational community with his parting wisdom about how large lecture courses, in colleges and universities, can be transformed in ways that more deeply engage students in learning.

With Richard G. Beery, Covington developed self-worth theory, which illustrated the steps that students took to protect their self-esteem in highly competitive learning environments. To avoid attributions made to a lack of ability – when faced with potential failure – students engage in self-defeating strategies such as not trying or procrastinating or employing excuses, all to preserve a sense of worth. While teachers typically encourage students to expend more effort, Covington provided a counter-view, by explicating the dynamics of effort as a double-edged sword, occurring in classrooms as we typically construct them.

His research findings recast the debate about the relationship between achievement and self-esteem, and called for reform of a reward-scarce schooling, where grades are equated with worth – instead to embrace the promotion of intrinsic motivation. As he wrote, “It is only when students engage in personally meaningful endeavors for which they can be justifiably proud that self-confidence grows, and it is this growing self-assurance that in turn triggers further achievement.”

Covington’s laboratory could be found in the college classroom. As a dynamic instructor of Introductory Psychology, he tested theories about motivation through experiments in instructional innovations. This creative work has resulted in an enormous data bank on student learning within varying instructional contexts, which has provided cohorts of graduate students the opportunity to study as well as influence motivation in the classroom. And this translation of instructional theory and empirical research into practice has been the hallmark of his efforts. Not only did he commit yearly to engaging undergraduates in the wonders of psychology but he also prepared graduate students to teach Psychology 1 [first, as graduate student instructors and then second, to be mentored in developing their own Psychology 1 courses]. His work in teaching development moved well beyond Psychology, through the GSI Teaching and Resource Center, where he helped faculty and teaching assistants, from more than 36 departments at UC Berkeley, revitalize their large lecture courses to awaken students’ intrinsic motivation.

For a glimpse of Professor’s Covington’s work, see this video of his Distinguished Faculty Lecture, given in 2012 at UC Berkeley.

Among awards for both research and teaching, Covington received the University Distinguished Teaching Award (1976), the Berkeley Faculty Award for Outstanding Mentorship of GSIs (2002) and was the first holder of the Berkeley Presidential Chair in Undergraduate Education (2001-2006). He was also honored with the Phi Beta Kappa Award for Outstanding University Instructor of the Year (1998), in Northern California.

Professor Covington leaves behind generations of students and readers whom he inspired and a loving family, with wife Bette, sons and daughters-in-law Matthew (JoAnn) and Mark (Jody), and four grandchildren, Tom, Neil, Max, and Hannah, to whom he was deeply devoted.

A fund has been created to honor Professor Covington. Contributions can be made to the The Martin V. Covington GSI Teaching Development Fund which will have its home at Berkeley's GSI Teaching and Resource Center.

Posted on the Center's website is a moving Memorial Tribute to Professor Covington, written by his former students and colleagues ( http://gsi.berkeley.edu//a-tribute-to-professor-martin-v-covington/ ).

Not surprisingly, this master scholar-teacher, who studied intrinsic motivation, lived his life fully immersed in the creative process – ever growing – not only in his research and teaching but also in his highly skilled photography, painting, airplane modeling, and his work as a magician. “Magic teaches us to see,” Covington has been quoted at saying, “And true magic never leaves us feeling the same.” So can it be said for productive learning in any domain!