Of rats and men: Tolman, behavior and academic freedom 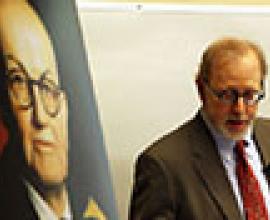 If you’ve ever been to Tolman Hall, you probably reached it not by rigid adherence to a series of mechanical steps — start at West Circle, go up Hilgard Way, first right to the end of Morgan Hall, then first left and voila — but by navigating via the map in your head. That is, you pictured its location, and figured out a suitable route.

If you’d made the trip Monday, you would have learned it was the man who lent the aging psychology building his name, longtime UC Berkeley professor Edward Tolman, whose pre-World War II work with rats in mazes changed how we think about how we think. His groundbreaking insights laid the foundation for the discovery of what’s been called “the brain’s GPS” — the underlying neural machinery of the cognitive map — and this year’s Nobel Prize in Physiology or Medicine.

Edvard Moser, who shared the 2014 Nobel with his wife, May-Britt Moser, and John O’Keefe, gave the keynote address at Monday’s daylong celebration of Tolman’s legacy. While Moser and fellow neuroscientist David Foster, of Johns Hopkins University, gave technical presentations on their clinical research — with due credit to Tolman’s pioneering work in psychology — others highlighted his role as a pioneer in the realm of academic freedom.

In 1949, as McCarthyism raged, Tolman took a high-profile stand against the special “loyalty oath” demanded of UC employees by President Robert Gordon Sproul and the Board of Regents. Although he was fired, he not only won back his faculty position but was instrumental in winning the fight against the oath, which was ultimately found to be unconstitutional.

“The issue I am concerned with involves not communists but liberals,” explained Tolman, reading a letter to Sproul at a meeting of the Academic Senate. “For, when one reads the second part of the oath again, one discovers certain ambiguities of statement and meaning which would make it very difficult for many of us liberals to be certain just what we were being asked to commit ourselves to.”

He further objected that because only individuals can “believe,” it was dangerous to require faculty to disavow membership in organizations that “believe in” the overthrow of the U.S. government. This, he said, was “neither good psychology nor good civil rights.”

In 1963, the year before the Free Speech Movement — whose support from the Berkeley faculty, said author and journalist (and one-time Daily Cal reporter) Seth Rosenfeld, was an extension of the loyalty-oath fight — Berkeley’s new psychology building was dedicated in his name.

Lucia Jacobs, a Berkeley psychology professor and evolutionary biologist with the Helen Wills Neuroscience Institute, said she organized the day’s talks because Tolman was “a hero of mine.” Noting that the hippocampus is found in the brains of all vertebrates, she said that “even though their brains look so different, in all of these animals the hippocampus was working in the same way. It’s actually creating a map of space. So the work of Tolman, in starting this ball rolling, is still picking up speed. We really don’t know how much more exciting it’s going to get.”

Lynn Nadel, who co-authored a book with Nobelist O’Keefe that he said built “extensively on Tolman’s thinking,” made a point of observing that he was speaking in the Faculty Club, “where [Tolman] led the revolt” against efforts to rein in what then-FBI director J. Edgar Hoover regarded as dangerous free-thinking at Berkeley.

“There was, in Tolman, this clear connection between science and politics,” Nadel said. “So when he talked about ‘narrow strip maps’ and ‘broad comprehensive maps,’ this was almost shorthand, I think, for him to say ‘narrow-minded people versus broad-minded people.’”

Tolman, whose mother was a Quaker, was described as a pacifist, a gentle man who started out with a distaste for the rats he employed in his maze experiments, but grew to become fond of them. A decade after publishing his landmark psychology work, 1932’s Purposive Behavior in Animals and Men, he wrote Drives Toward War, a 118-page work in which he called for, among other things, “a supranational state to which individuals, wherever they may be, can become more loyal than they then will be to their narrower national groups.”

Jacobs, saying she’d wanted the conference to highlight not just his cognitive-mapping work but also “his humanity and courage,” quoted from a lecture Tolman gave at Berkeley in March 1947, not long after the end of World War II. (The words would be published in his 1948 paper “Cognitive maps in rats and men.”)

“Over and over again,” Tolman said, “men are blinded by too violent motivations and too intense frustrations into blind and unintelligent and, in the end, desperately dangerous hates of outsiders. And the expression of these displaced hates ranges all the way from discrimination against minorities to world conflagrations.”

He concluded his talk, Jacobs said, this way: “We must, in short, subject our children and ourselves (as the kindly experimenter would his rats) to the optimal conditions of moderate motivation and of an absence of unnecessary frustrations, whenever we put them and ourselves before that great God-given maze which is our human world.”