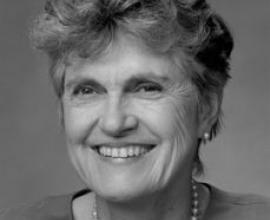 One of the great joys of being an oral historian is getting to talk to people you otherwise wouldn’t have known. We have the privilege of asking people about their lives, putting their experiences in context of the larger historical landscape, posing questions that others don’t have the opportunity to ask. I had the opportunity to do just this when I interviewed Professor Susan Ervin-Tripp in 2016.

Professor Dan Slobin puts it best in the introduction he wrote for Ervin-Tripp’s oral history:

Throughout her long and productive career, Susan Ervin-Tripp has repeatedly been a path-breaker. And the paths that she helped explore have become well-traveled roads. I is remarkable to see so many innovations in one life story: psycholinguistics and sociolinguistics, embracing new directions in the study of first-language acquisition as well as bilingualism; repeated applications of new technology: computers, tape recorders, video recorders, wireless microphones; design of new methods of transcribing and documenting the many layers of speech interaction; cross-linguistic and cross-cultural research, with attention to both individual and interpersonal dimensions of language. Along with these contributions to the scientific side of her profession, Ervin-Tripp has given equal attention to the institutional and political dimensions of academia, focusing on the treatment of women and minorities. Wherever possible, she used her academic skills as a psycho- and sociolinguist to provide a scientific foundation to her advocacy.

Slobin is not the only one who values Ervin-Tripp’s many contributions. Her interview was part of our Class of ’31 series, in which faculty and staff, both current and retired, are nominated by admirers to the subject an oral history. Ervin-Tripp received numerous, passionate nominations which conveyed a resounding eagerness to document her work in academics and equity, knowing that we could all benefit from learning about her trailblazing work.

I sat down with Ervin-Tripp for our first interview in May of 2016. It was immediately clear that she was a practiced speaker, having taught for many years, with a healthy sense of humor. She was poised and articulate, prepared with her notes. Over the course of our six hours of interviews, we discussed her childhood during the Great Depression in Minneapolis, Minnesota, her undergraduate education at Vassar College, her doctoral work at the University of Michigan, and her career at UC Berkeley, which began in 1958. She detailed her work on the Southwest Project in Comparative Psycholinguistics studying the connection between language and cognitive performance, her time as a professor in the Psychology and Speech Departments at Berkeley, her early adoption of technology in her research, her participation at Stanford University’s Center for Advanced Studies in the Behavioral Sciences and with the 1985 Scientific Exchange program in France. She talked about the significant advances that she made for women’s equality on campus and the multiple efforts she made to create such change.

It was a pleasure to have interviewed a woman whose career has impacted Berkeley so greatly. There are many lessons to learn from this interview, particularly the courage and persistence it takes to create an equitable environment. Professor Susan Ervin-Tripp’s oral history is one that is rare for her generation and one that should be celebrated.

To read the full interview, please click the link below;

By mmeeker in Bancroft Library, Oral History Center on March 6, 2017