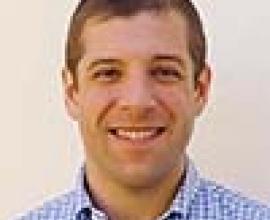 A decade ago, Aaron Fisher was a nanny in Manhattan for a successful actor (don’t ask who; he can’t tell) after giving up his dream of being a famous rock musician in San Francisco. Feeling at loose ends one night, the Wesleyan-University-trained guitarist scanned the Web and randomly applied for a post-baccalaureate in psychology at Columbia University.

Fast-forward to 2013, Emily Becklund was working in Los Angeles as a personal assistant for the reality TV Kardashian family and feeling similarly adrift. “I had all these intellectual questions and pursuits that I had never given a fair shot to in college because I majored in the wrong thing,” she said. “I was mad because I thought I would never be able to go to grad school.”

Different places, different times, but today Fisher and Becklund’s academic dreams have converged at UC Berkeley where Fisher, 37, is a junior professor in psychology, and Becklund, 24, is the first student to sign up for the post-baccalaureate program that the  psychology department launched  this fall, inspired by Fisher’s success.

“It was one of those serendipitous events,” said Becklund, who graduated from the University of Southern California in 2012 with a degree in public policy. “It was exactly what I was looking for.”

First of its kind on the West Coast

The first of its kind on the West Coast, UC Berkeley’s two-year post-baccalaureate in psychology is targeted at the most academically promising young men and women with undergraduate degrees and work experience who want a fresh start in academia. No prior experience in psychology is needed.

“It doesn’t matter if you were an English major or econ major. Whatever you did before, did you do it well?” said Fisher, a clinical psychologist and researcher who joined the UC Berkeley faculty in 2013 by way of a Ph.D. from Penn State and a postdoctoral fellowship at Stanford. “We’re looking for people who are offering themselves up to be retrained.”

With acceptance rates ranging between 2 and 10 percent in UC Berkeley’s graduate psychology program – which currently ranks second in US News & World Report ratings – the campus’s psychology leadership is tapping in to a growing demand for programs that bridge the gulf between undergraduate and graduate programs for people looking for a second career.

“We get you the right classes with top scientists in their field, the right research experience, personalized advising and, if you do well, genuine, positive letters of recommendation,” Fisher said. “We’re custom-wrapping with a bow on top what you need to get into grad school.”

An entrée into the tech industry

While more than 120 post-baccalaureate pre-med programs are offered around the nation, only about a dozen or so public and private universities offer a post-baccalaureate certificate in psychology, including Columbia, Northwestern and the University of Pittsburgh. The American Psychological Association estimates that by 2020, the demand for psychology professionals will grow 22 percent.

Moreover, Google, Facebook, Twitter, Apple and other Bay Area-based tech companies are rapidly hiring social scientists to make sense of a steady avalanche of facts and figures: “These companies are awash in data,” Fisher said. “They need to know what to do with the data, what to think about the data, what conclusions to draw.”

At $15,000 per semester, the made-to-order program is a big investment. To ensure the program attracts the type of talent that thrives in academia, Fisher is building it cautiously. Three students are enrolled now, and another two will join in the spring. About 10 applicants were turned away this year. Eventually he hopes to have 20 students enter each year.

“We want people who are maximally competitive,” he said. “The success of the program depends on students being placed in graduate programs.”

Hana Ra, 29, of South Korea, fits that profile. After graduating top of the class with a degree in English, she worked in sales for a semiconductor company. When she heard that tech companies were hiring psychologists to help improve the user interface and experience, she saw UC Berkeley’s post-baccalaureate in psychology as a way to get ahead, and get a Ph.D. in the process.

“I really have no background in psychology. It’s very new,” said Ra, who has already been put to work in a neuroscience lab that does high-level computational modeling. “It’s very competitive, and at first I felt a lot of pressure, but it’s getting easier.”

Becklund, who grew up in Petaluma, Calif., feels she’s finally on track after taking a major academic detour. In her junior year at USC, she got some bad advice, she said, and focused on real-estate development: “I completely lost my academic drive,” she said.

A sneak preview of the Ph.D. lifestyle

After graduating, Becklund took jobs as a photographer’s assistant, a director’s assistant and a personal assistant to a Kardashian. Working in the fast-paced entertainment industry not only sharpened her organizational and time-management skills, but also piqued her fascination with human behavior.

“I constantly wondered about personality disorders, like narcissism, and I had friends dealing with depression and anxiety,” she said. So when she resolved to apply for Berkeley’s post-bac in psychology, she felt she was finally emerging from the intellectual wilderness. Her acceptance email came in June just as she was bound for Brazil’s World Cup.

“I was so excited. I couldn’t wait to tell my parents,” she said.

This semester, Becklund is taking three introductory psychology classes, a weekly colloquium, and looking for a research project in a social/personality lab.

“I’m enjoying being a fly on the wall at lab meetings and hearing the process that each Ph.D. goes through,” she said. “You’re taking undergrad classes, but then you have this extra peek into grad school.”

Fisher can relate to Becklund’s circuitous path to psychology. A native of Newton, Massachusetts, he graduated with a degree in music from Wesleyan University in 2000 and set off for San Francisco with his band, hoping to hit it big.

Though the band played at Bay Area hotspots like the Elbo Room, they never caught on. At the same time, he lucked upon a teaching job with the San Francisco Unified School District, but felt wholly unprepared for the challenges of Downtown High, a continuation school where he taught English and algebra.

“I was naïve and still trying to understand the world,” he said.

After four years in San Francisco, the band members tried their luck in New York City, where Fisher’s brother worked as a sound engineer. But after just one gig at the famed Knitting Factory, they decided to call it quits. As he mulled over his next move, Fisher took a job as a nanny for a New York-based actor. A non-disclosure agreement prevents him from identifying his employer, but his glimpse into the celebrity lifestyle triggered in him a need to achieve his own version of success, and so he began to dig around online for career opportunities.

“I was literally sitting at the computer at 1 a.m. looking for a purpose in life, stability, structure,” he recalls. “Columbia University had a post-baccalaureate in psychology and so I wrote a personal statement, put it on a zip disk, went to Kinko’s, printed it out and sent it off.”

It paid off. Columbia’s post-bac community provided him with the camaraderie and intellectual stimulation he had been missing, leading to his Ph.D. at Penn State and a postdoc at Stanford that brought him back to the San Francisco Bay Area, where he and his wife planned to raise their family (they now have three young sons).

At Berkeley, Fisher is developing a cognitive behavior therapy program that uses smart phones and “fancy statistical models” to customize diagnoses and treatment regimens for depression and anxiety disorders. But his other baby is definitely the post-bac program.

Not for a minute does he regret the impulsive career move he made that night in Manhattan when he signed up for a post-bac: “I’m still paying off those loans,” he said. “But it got me this career, and there’s nowhere else I’d rather be.”