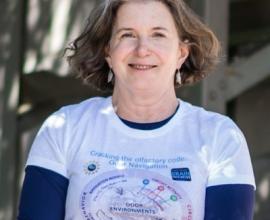 Fox squirrels flick their tails when they can’t get a cherished nut in much the same way that humans kick a vending machine that fails to deliver the anticipated soda or candy bar, according to new UC Berkeley research.

In what is thought to be among the first studies of frustration in free-ranging animals, the findings, published online in the Journal of Comparative Psychology, suggest that animal tail movements reveal their emotional states, particularly the exasperation they feel when stymied during problem-solving tasks.

“Our results demonstrate the universality of emotional responses across species,” said study lead author Mikel Delgado, a doctoral student in psychology at UC Berkeley. “After all, what do you do when you put a dollar in a soda machine and don’t get your soda? Curse and try different tactics.”

Delgado and fellow UC Berkeley researchers tracked 22 fox squirrels in their leafy habitats on the campus, putting them through a series of foraging tasks that had them puzzle their way into various open and locked containers to get to nuts or grains.

The more frustrated the squirrels became – especially if the container was locked — the more they flicked their bushy tails.

On a positive note, these stages of tail-flagging irritation, and even aggression, led fox squirrels to try new strategies, such as biting, flipping, and dragging the box in an attempt to land a reward. The results imply that acts of frustration may be necessary and beneficial to problem solving, Delgado said.

“Animals in nature likely face situations that are frustrating in that they cannot always predict what will happen,” Delgado said. “Their persistence and aggression could lead them to try new behaviors while keeping competitors away.

“While not a direct intelligence test, we think these findings demonstrate some of the key building blocks to problem-solving in animals – persistence, and trying multiple strategies,” she added. For half a decade, Delgado has been using the UC Berkeley campus wilds as an animal behavior laboratory, particularly in tracking squirrel traits.

Shows of frustration have been observed in chimpanzees, pigeons and even fish, “but we don’t know much about what function they serve,” she said.

After nine trials of being rewarded with easy-to-obtain walnuts, the squirrels were faced with the unexpected: Some found an empty box, others a locked box, and still others a sorry piece of corn instead of a walnut. As predicted, their tails flicks increased with each disappointment, and the locked box was the most irritating.

Researchers videotaped the squirrels’ foraging trials and found that once the critters got over their frustration, they tried new tactics, such as biting the box, flipping it, dragging, and generally spending time puzzling over how to open the box.

“This study shows that squirrels are persistent when facing a challenge,” Delgado said. “When the box was locked, rather than giving up, they kept trying to open it, and tried multiple methods to do so.”

To advance this line of research, Delgado said, researchers in the future would use a puzzle box with multiple ways of entry so that the squirrels could be trained to use one access point, and would then need to figure out new ways to gain access to the nuts or other rewards when the familiar path was blocked.

For the past century, fox squirrels have made a home on the UC Berkeley campus. They can be distinguished from the more rat-like eastern gray squirrels by their reddish hue, bushy tails and overall cuteness. They are diurnal creatures and are prey for many animals, including foxes, coyotes, dogs, hawks, eagles and owls.