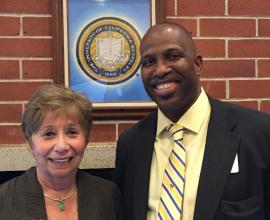 On May 12th at the Alumni House, a Book Launch was held for Achieving College Dreams: How a University and Charter District Partnership Created an Early College High School.  This book was edited by Professors Rhona S. Weinstein, Psychology and Frank C. Worrell, Education and Psychology and recently published by Oxford University Press.

Achieving College Dreams tells the story of a remarkable more than 10-year partnership between the University of California, Berkeley, and Aspire Public Schools to develop and nurture the California College Preparatory Academy or CAL Prep.  This early college secondary school opened in 2005 and serves as an exemplar in providing low-income and first generation college youth with an excellent and equitable education.  The deep research-practice partnership brought together an interdisciplinary team on campus, reflecting collaborations among many disciplines and programs, and was fueled by support from the Center for Educational Partnerships and Gail Kaufman, its former deputy director and now senior advisor.

Framed by a longitudinal lens, findings from collaborative research, and a diversity of voices, the book takes readers inside the workings of the partnership, the development of the school, and the spillover of effects across the district and the university.  The attainment results have been gratifying -- with its high school graduates successfully completing California’s a-g course requirements as well as 4 college classes and gaining admission to 4-year colleges and universities.

As part of the celebration, 21 individuals read brief excerpts from chapters to illuminate the journey taken.  Among the readers were UC Berkeley administrators, faculty, staff, and former graduate students, Aspire leadership, and CAL Prep teachers as well as graduates.  What moved many to tears were the words of three CAL Prep graduates.

Xavier Taylor, now graduating from St. Mary’s College, wrote about the earliest days of the school, which he described as “CAL Prep’s phase of Mayhem.”  “It was survival of the fittest… However, illumination and stability were right around the corner.  Class of 2012, we have come a long way… we are [now] a family.”

Shyra Gums, currently a junior at CAL State East Bay, wrote about the contrast between her early experiences and what she found at CAL Prep.  In her words “Most of your life you heard others, and trained yourself to believe… there’s nothing there.”  This school enabled her to “release all the waste of fear” and to find joy in achievement, which she eloquently described as “the light sparkling under your frozen feet.”

And ab, now graduating from UC Berkeley, raised the question “Is there an award to give CAL Prep?  Maybe a Nobel Prize … Before I got to CAL Prep, I never thought about science.  Now I think of myself as a scientist.”

UC Berkeley is one of four UC research campuses that have partnered with districts to create college-going public schools.   This network, also including UC San Diego, UCLA, and UC Davis presented at an invited presidential session at the centennial meeting of the American Educational Research Association on April 11th in Washington DC.  Showcased there was a brief film about the schools and a joint policy brief about lessons learned.

For more information on the book release, please see the following link.